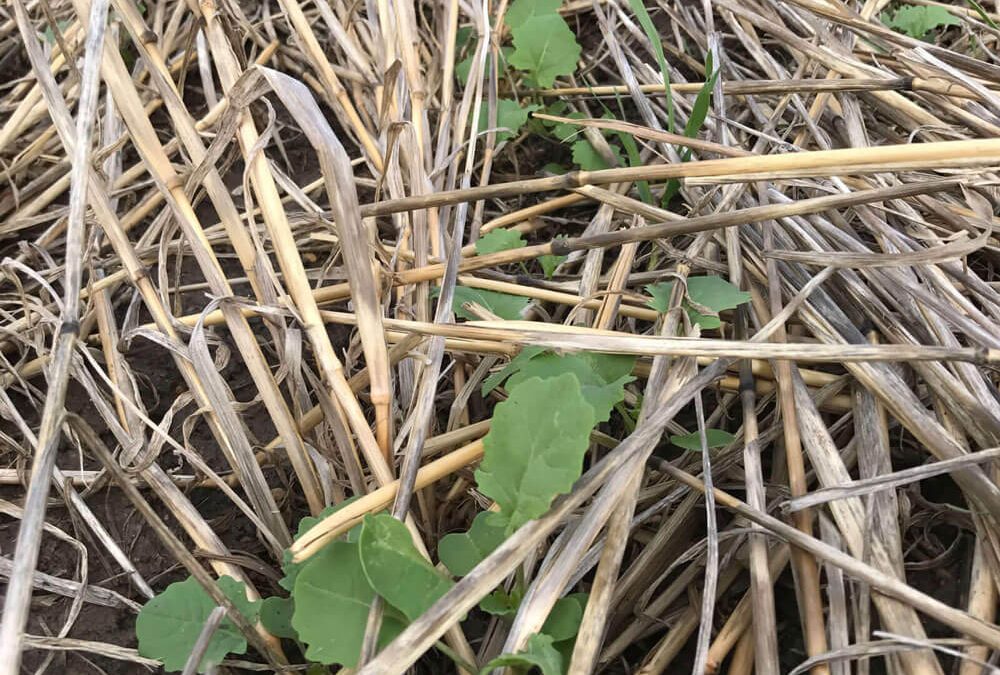 The black keeled slug and grey field slug are common pests of the high rainfall zone in Victoria causing damage to emerging crops especially canola. Most growers have implemented an integrated pest management strategy that includes burning crop residue and disc ploughing soils to reduce slug habitat, and this is combined with baiting to reduce slug numbers to a safe level to allow the establishment of canola crops. These control techniques have led to an increase in potential erosion from ploughing and loss of stubble to protect the soil, as well as nutrition losses from burning residues. Some committed no-till farmers have resisted the temptation to plough and burn their paddocks, but are spending far more money on baiting strategies to protect their emerging crops with variable results. Hence we ran trials in 2014 and 2015 to test whether increasing the number of bait points around the emerging crop, by placing the baits immediately above the crop row, is more effective compared to spreading the same rate over the entire field, as is the common farmer practice at the moment.

Test for increased slug bait efficacy by concentrating the bait over the crop row, hence improved crop establishment in no till cropping systems.

Slug activity and density were estimated using tiles, with numbers assessed pre sowing and treatments. Post sowing assessments were made every four days, weather dependent, and presented as Weeks After Application (WAA). Seedling density was estimated until six leaf stage. Initial counts were used to design trial layout, treatments applied in strips that best intersected slug populations. Plots were systematically laid out at distances greater than 10m to ensure statistical ‘independence’. Width of treatments was determined by the machinery fitting controlled traffic tramlines but was wide enough to ensure plots were independent as determined by spatial analysis. Four trials (three canola, one sunflower) were run in total over two seasons (2014 and 2015) with results presented from one trial, although overall conclusions were the same. Treatments were applied at sowing: with baits (Meta and Metarex) applied either in a band (three rates) or surface spread (S, single rate) or with insecticides. Those being Lannate Lɸ (472g/L methomyl) alone or Lannate L plus Regent (200g/L fipronil) with both applied as a concentrated drench in a band equivalent to registered field rates.

ɸ There is currently no Lannate L or Regent products registered for use on snails/slugs in any crops.

However, slugs were not the only cause of seedling loss as indicated by poor fit of the logistic regression (R2 = 0.07; F 1,53= 4.06; P = 0.04) and a strong linear pattern in the residual plots. No further analysis was conducted, due to the confounding influence of other pests, including earwigs, on canola seedlings.

The targeted placement of bait around emerging seedlings gave no significant improvement in protecting the crop from slugs. Canola can be established with disc-seeders into stubble in the HRZ as long as some basic rules around timing of bait application are followed. Soil moisture at 50-60cm was associated with increased grey field slug activity at the soil surface as recorded by using surface refuges during this project.

Research has been reported by GRDC at the following links

3. Asset Management for profitability and sustainability